Bring Me The Head Of Kirith Kodachi

“Look at the Caldari over there. I say: Miner.”

I followed Eta’s gaze. “You sure? He looks awfully dapper to be a Miner.”

“Very sure. I’ve come across his type - they like to spend their ISK on clothing, to make up for all the boredom in the belts.”

Taking a sip from my drink, I nodded. “Agreed. I’d even go so far and say: scout, or at least fast tackle. She’s used to getting podded - you can see it in her eyes.”

“You’re right.” Eta’s eyes followed the pilot as she weaved through the crowd. “Cute, though.”
I grinned, and took another sip. Since CONCORD had imposed a lengthy no-fly period, ostensibly in reaction to the increased reports of Sansha incursions, Eta and myself had taken to chilling out in a Carthum station in Pimebeka. The bar we selected provided the ideal combination of hearty drinks (at least for me), and a good overlook over the station’s promenade.

Finding my glass empty, I waved to the waiter for a refill, and was just about to return to our game of “Guess Their Profession”, when my personal communicator chirped,
I looked inquisitively at Eta, but she just shook her head: she wasn’t expecting a message either.

According to the comm’s display, it was a live holo call from EL8 in Pure Blind, which meant...
“Hello Heloisa. Long time no see!”

[ I could say the same! How’s it going in Industrial land? ]

[ Plus some fighting - I see 14 kills on your record. What happened, and why didn’t you invite me? ]

I cleared my throat. “First of all, I did invite you - but you said you were busy with some kind of advanced training....”

“...and second, on at least half of these kills I didn’t even do any damage. So as far I am concerned, they don’t really count.”
[ Still, they are on your record now. But tell me, what happened? ]
“Well... you remember that original idea was the Kirith Kodachi, on account of his six year anniversary, would jump his carrier into a lo-sec system and then give everybody half an hour to kill him. You could say that the event snowballed a bit...”

The first sign that this event wouldn’t be just a little shootout was when Noir announced that they would send a body guard for Kirith. Other capsuleers also announced their support, and quickly there were rumors that a cap-drop from one of the larger 0-sec alliances was in the planning. An announcement on GalNet news was then just the cherry on top.

Myself, I had drummed up support inside our alliance, partly because it promised to be an entertaining event, but also because in light of our renewed 0-sec aspirations it was time that we exposed ourselves to some actual combat. But in all that, we had no idea of what opposition we would face; an uncertainty which expressed itself in our fleet composition: we had all from short-range frigates up to battleships.
Myself, I took a break from my usual battlecruisers and for the first time ever fielded an Armageddon-class battleship. Considering the possibility of an ECM-backed cap-drop as well as lack of logistics, I decided to forgo some of the DPS output in favor of a single rep buffer tank, to give me some survivability. But just in case, I also prepped four battlecruisers to fall back on.

I needn’t to have worried, though: when we arrived in Teshkat, the fleets were forming (a temporary truce between the attackers and defenders was in place), and not only was there a logistics wing in place, the defender fleet was even backed by a carrier. We gathered at the top station in the system, and seeing that there were a number of normally industry-minded pilots in the fleet, the FC ran us through a number of broadcasting and targeting exercises. The number of pilots in system steadily increased, soon reaching 250 and increasing even further. Finally the word came: Kirith’s carrier was at the customs office at planet IX! The FC put the fleet into warp, and the fight was on!
I sent out a flight of Valkyries, and settled into an orbit around our fleet carrier. My shield was dropping, but I couldn’t see where the fire was coming from: even with our fleet removed from the tactical overview, the list of ships was still longer than could be displayed. Our FC started calling primaries and hundreds of weapons discharged into space.

The attackers had brought a fleet similar in composition to ours: a large number of battlecruisers, supported by battleships, logistics, stealthbombers, and a smattering of cruisers and frigates. No carrier on the attacker side however, and with Noir having upped their presence on the field in anticipation of a cap-drop, the defenders outnumbered the attackers about 2:1. 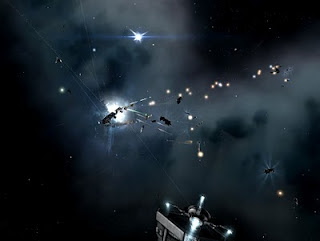 Quickly the weaknesses in my Armageddon fit showed: most primaries were at the outer limit of my Scorch pulses, and my choice of ECCM over a sensor booster meant that smaller targets exploded before my locks resolved. Nonetheless, some of my shots landed, and while the attackers appeared to lack organization, our fleet picked them off one by one.
I recalled my Valkyries, which were just being chewed up on the field, and instead sent out a flight of Warriors. Whoever had been shooting me must have been eliminated, as my shield had recovered to 70% strength, and I was just about to target the next primary when we got new arrivals on the field: The Goons sent their regards, in form of a Thrasher/Blackbird fleet.

However, even their numbers weren’t large enough and after decimating most of their fleet, they withdrew mostly to wreak havoc all across the the system.

And so it continued: the attackers continued to press on, but never reached the critical mass to turn the tide in their favor. At times all attackers were so far out of my range, that I didn’t have anything left to shoot at.

Eventually, Kirith declared the defenders to be victorious - but since the goal of the event had been to destroy his carrier in celebration, he asked that both attackers and defenders would renew their attacks on him.

We didn’t need to be asked twice: all pilots directed their fire onto the carrier, and under the onslaught of the two fleets combined, the carrier died within three minutes.
And my Armageddon was still alive.

[ Uhm - I see a kill mail for your Armageddon? ] - Heloisa’s question brought be me back into the there and then.

“Yes, that happened in the aftermath.” I took a drink from my glass, which had magically refilled. “After the carrier exploded, most people left for home, but some stuck around - some to loot, others for lack of something better to do. So inevitably somebody started shooting somebody else, and for a while it got interesting again.

My Armageddon had been tackled by a Hurricane, so when the last of the defender fleet withdrew, I couldn’t follow. I then made the mistake of wavering too long whether to shoot the Hurricane, or sent my ECM drones against it. By that time, I was under fire from ten or so other ships, and my single armor repairer couldn’t keep up.

And thus endeth the story of my Armageddon - her life was short, but glorious!”

[ Hear hear - I drink to that! ]
We sat in silence for a moment, then Heloisa spoke up again.

[ I got to get going - things are about to get interesting again up here. Fly dangerous! ]

“Same to you - until next time!”, I replied and her image winked out.
I turned to Eta. “You have been awfully quiet?”
“I didn’t exactly had much to add, now, did I? All I managed to do was to get my CovOps popped while filming the whole thing. Probably ruined half of my footage.”

“True, true. And that happened even though you named it ‘Cameraship - Have Mercy!’“
”People are so inconsiderate these days!“
- Posted 4:33 PM 2 comments:

Sometimes, it is nice to just sit back and enjoy the show (click for full-size picture). 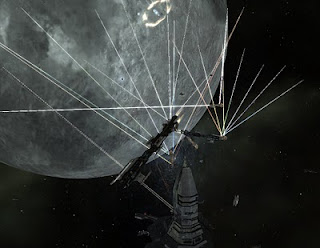