I haven’t seen you around in a while, and you haven’t exactly been writing much either (courier contracts don’t count!). I know you haven’t been a complete sloth, so - what’s up?

On our end of things, it’s just the same-old industrial stuff. Though it seems that our WH expats have been doing some improvements to their PI colonies, so that they’re now reaching out to us for the final processing steps. Some extra work for us, but we get a cut of the profits, so it’s good.

It hadn’t been a completely successful month, so I didn’t feel much like chatting. Plus, I had been distracted with ... other things, which I can’t talk about right. Ok, don’t want to. At least not until I know whether they’ll pan out or not.

Another downside was that though I did manage to go on two roams this month (and missed a third - bad me!), I wasn’t quite in the mood to write them up. Doesn’t mean that they weren’t fun: on the cruiser roam I pretty much broke even . We even had a newly minted alumnus on that roam, who had passed PvP Basic just the week before - she did really well!

And two weeks before: the PvP Basic class roam! Gods, it had been ages that I had been out with a frigate mob! It was great fun - of course we whelped at least once , but that is to be expected. The roam ended in a massive brawl with the RvB Ganked fleet, who happened to be out at the same time.

But probably the best thing which happened (sadly I don’t remember on which roam it was) was after one of the big fights, with us limping home in a fleet consisting mostly of rookie ships, when we came across a Naga. We still had some fast tackle with us, which nabbed the Naga, and we proceeded to shoot it, just because.

And the Naga pilot... ejected! He probably didn’t want to face the ridicule of having a loss against a bunch of rookie ships! 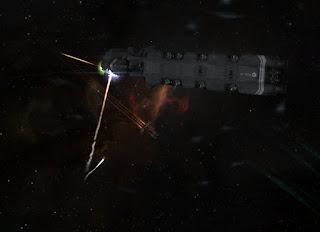 So, there you have it - my life this month in a nutshell. NY Eve I’ll try to spend in Umokka, for the fireworks show, and then, if I don’t oversleep, the Agony roam on the next day. After that ... we’ll see. Finally buying ship fittings, at least (I hates it).

Well, that had been embarrassing.

It had started out innocently enough: fly down to my former stomping grounds, borrow a short-range Apoc from my former corp to help my former alliance help their new friends to take down two POSes...

Yes, yes: there were a lot of ‘former’ in the before statement, but it never hurt to keep connections alive. Plus: Siege Rorquals!

And as bonus, I had discovered one more fully-fitted ship that I had left behind: My good old Thrasher, which supported me on my first (and unsuccessful) WH walkabout. Just the right thing to fly back after the op, into the nearest trade hub, to restock my supply in ship modules.

I was deep in Amarr space, and such expected no troubles on my way to Amarr Prime, but nonetheless, while the autopilot suggested the route, I did fly it by hand: warp to gate, jump, warp to next gate.

As expected, no problems. Until Sarum Prime. A gate like any other - I jumped.

And on the other side, a Factional War target on grid - or as it’s also known: “an orange flashy”.

I remembered the torrent of thoughts running through my mind at that moment.

I didn’t make it: he jumped the gate seconds before me, and he had left the grid by the time I got to jump the gate myself.

But all the while, a memory had started to haunt me. It had been taught to us in Academy, and other pilots had picked up on it as well. It was one of those kind of things which sounded obvious on paper, but were surprisingly hard to realize.

I hadn’t been in the right state of mind for this encounter - I had been in state ‘White’ even though I should have been in ‘Yellow’, given my current association.

Such a simple guideline to keep in mind - yet I hadn’t. Maybe because it was such a simple one.

At least not all hope was lost: I did manage to avoid mental state ‘Black’.
- Posted 5:28 AM No comments: