A Déjà Vu Of Sorts

“It is usually a glitch in the Matrix. It happens when they change something.” -- Trinity

“Good morning!”, he called out as I entered the main room, freshly showered. “I made some coffee - want some?”

I walked over to him in his kitchen, and hugged him from behind, giving him a light kiss on his shoulder. “Good morning, handsome.”

“Hmm, I could get used to that.”, he replied. Turning around, he gave me a kiss on my forehead, and handed me a mug. “Here - enjoy.”

Leaning against the counter, I took a sip while he poured himself a mug as well. It was indeed good coffee!

“I didn’t know that making coffee is so strenuous that you had to take off your shirt for it!”, I teased.

He grinned at me and winked. “Look who’s talking! Besides, I know you enjoy the view.”

Well, he was correct on that. Genetics had given him an enviable muscular build, and while the look of his prosthetic arms had taken some getting used to at first, I could no longer imagine him without them.

“Want anything to eat? I for my part am starving!”

I took another sip. “No, thanks, coffee is enough. But you go ahead - it is your kitchen after all.”

“As you wish.”, he smiled and turned back to his preparations.

Slowly drinking my coffee and watching him, I thought back over the last couple of days. We had met by chance at a social event, and found that we went along well. He was an outlaw like myself, only more successful, flying for an established low-sec alliance. After the event, he had asked me out for a drink, and then surprised me by not joining me for the night. It took another evening, and some obvious moves on my part, to make that happen, but it had been worth it.

A memory of the previous night ran through my mind, and I grinned. Oh yes, definitely worth it! Except… I had the suspicion that he expected this to turn into something more. Some of the comments he had made…

I sighed, and emptied my coffee.

“Everything ok?”, he asked, turning around, a full plate in his hand. I nodded neutrally. “Yeah, no worries. Let me just top this up and I’ll join you.”

Mug refilled, I slowly walked to the table where he had sat down, and seated myself at a right angle to him.

“So, what are your plans for today?”, he asked between bites.

“Work.”, I replied with a slightly sad tone. “I would have loved to stay longer, but…”

“I would have loved that, as well.”, he teased, then continued: “That’s about the POS, isn’t it? You hinted something before…”

“Yup. This little two-man corp who had war-decced us?” I took a sip. “Apparently they had found an offline tower of ours and thought ‘Yay! Easy target!’ Of course they didn’t tell us that, but once we started investigating them, their MO became obvious. So we found which of our towers was offline, and took it down.”

“We may never know.”, I laughed back. “And they are going to be even more unhappy today!”

“Well, part of our usual war target investigation is to run locators on our hostiles. One of them we found somewhere out in the Forge, and since one of our pilots had nothing better to do, he took a CovOps out there and snooped around a bit. And by pure chance, he found their POS.”

“Ooops indeed: a small tower, three labs, no guns, no hardeners. So two days ago we hit it and put it into reinforce.” 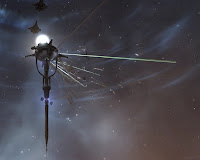 “And now that it’s coming out, you’re going to hit it again.” he completed the thought. “Did they add any defenses in the meantime?”

I shook my head. “Nope. We’re wondering if they even paid attention to the structure attack notification.” I emptied my cup. “But, yeah, that’s what’s up. While I can’t go on the op itself, I should at least be at base, in case something escalates.”

“Understood.”, he nodded, then touched my arm. “Thank you for two wonderful days.”

“No, thank you.”, I smiled, then leaned forward and kissed him on the lips, running my hand through his mohawk, procrastinating. Finally he broke the kiss.

“Right.” I got up, put on my jacket, and collected my few other belongings - as usual, I had been traveling light. Finally I walked back over to him - and a sense of déjà vu stopped me. Suddenly I didn’t want to just walk out like I had done with so many others before, or like it had happened to myself.

“Listen, usually I don’t do this,” I began slowly, “but I’d like to meet up with you again. If you like. Even if it’s just for drinks and conversation. I don’t often meet people who understand the outlaw life.”

He smiled at me, then took my hand and kissed my finger tips. “I was afraid you’d never ask. Of course I'd like to - and then you can tell me all the unclassified details from your op.”

“It’s a date, then.” I briefly kissed him on the lips again, then straightened up. “Sorry, but I gotta go.”

With a last smile, I turned and headed towards the exit, thoughts churning.

What had I gotten myself into this time?
- Posted 10:33 PM No comments:

Wars and Other Setbacks

"The one good thing about repeating mistakes is you know when to cringe."


Eta’s question caught me unaware, and I almost choked on my coffee.


Eta’s eyes gleamed. “No, the guy who you are having the hots for.”


I sighed mentally. It was always fun to meet my sister and catch up on the recent events, but she had a way of changing topics which always tripped me up.


“Tut-tut,” she wagged a finger at me, “I know this expression of yours. So who is he, so that I can break his kneecaps if he doesn’t behave.”


I grimaced. “Can we please not talk about that?”


“I knew it!” Satisfied, she leaned back and took a sip of her drink. “Now this war of yours - what was that all about?”


“We weren’t sure at first,” I replied, happy to be back on safe terrain. “As we haven’t annoyed people recently - at least not too much - we thought: trade hub campers. But then my old corporation suddenly got a structure notification: somebody really wanted their POCO in Akhmoh.”


“Ah, that’s why you had me prepare some Scythes!”


“Yes.” I took a sip from my coffee. “Unfortunately the stars weren’t aligned for us: the POCO came out at an inopportune time, Akhmoh was too remote for us to form a good response, and worse: our scout told us that all POCOs in that system had been attacked. Our war-deccers were intent on controlling the system, while we weren’t, so it was an unwinnable situation.”


Eta nodded. “Kinda like the Flyers in their old home system.”


“But what did you do then? I don’t think that your boss would just roll over.”


“And you’re right on that.” I grinned. “Remember Aunt Xi’s operation?” Eta nodded, and I continued. “Well, she sent down an agent, and as soon as our POCO popped, her agent set up an empty gantry, away from the grid.”


Eta looked confused. “But what good does an empty gantry do?”


I counted off my fingers: “One, as long as the gantry is there, nobody else can claim the spot. Two, as the gantry has no subspace beacon, it needs to be probed out. And three, even the gantry has 15M structure to chew threw.” I smiled. “So you see: pure harassment, and it’s not too expensive either.”


She laughed. “So that’s why Auntie got war-decced as well - I was already wondering. They did take out the gantry, I presume?”


“Yes, they did. And a number of our other POCOs along the pipe as well, just because. But they kinda lost interest - some of our POCOs survived, as did another empty gantry.” I looked at my cup. “So in essence we now have an undeclared truce until the wars expire.”


“And then, will you rebuild?”


“Doubtful. The income wasn’t that great, and as this war has shown, they exposed us too much.” I sighed. “It was nice while it lasted.”


“Don’t I know that feeling.” Eta looked pensive for a moment, then gestured her drink at me. “So, when are you going to see him again?”


I rolled my eyes, but couldn’t repress the visual memory of a back vanishing into the crowds of a station.