Punching Above My Weight Class

“Little piece of advice. You see an Agent, you do what we do: Run. You run your ass off.”
-- Cypher, The Matrix

In the academy they had told us that while it would hurt, it would only be for a moment. What they hadn't told us, though, was that for some pilots it would also be the first conscious moment when awaking in a new clone.

I stumbled out of the vat, dropping onto my knees for support until the searing pain diminished to a dull throbbing behind my temples, and my eyes were capable again of providing the visual clues necessary for standing and walking. On the plus side, it did distract me from the unpleasantness that was coughing up the vat fluid from my lungs.

No wonder that some people never left the safe embrace of high-security space, and sometimes I wasn't too sure about myself, either.

But as I eventually walked back into my main quarters which I had left scarcely three hours ago, dressed in a simple gown and nursing an Arcturian tea, the images on my terminal reminded me why I was out here. Setting the mug onto the console, I sat down and paged through the images my camera drones had managed to send home before succumbing to the energies swirling around them. 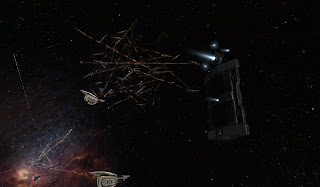 Nashh Kadavr had invited all pod pilots to a party, on account of his retirement from active flight duty - and fitting to his occupation, the highlight of the party was to explode him and his carrier one last time.

This would be the second time that I was involved in such an event, but last time it had been as part of a fleet, with something resembling a plan - but this time, it had been just me. And to make things more interesting, I still hadn't finished staging all my ships here, despite all best intentions to the contrary (and much grumbling from dear Eta).

So in the end, my ship of the day had been again a humble Purifier, hastily fitted, which carried me towards Goinard through systems I didn't yet had time to explore. Or put more charitably: I would be fashionably late.

Hopefully they’d leave me some of the drinks!

Jumping into Goinard (finally!) came as a physical shock: one moment my Purifier was elegantly flitting among the stars, the next it had all the responsiveness of a cat lying in a puddle of sunlight after a good meal.

It had been known for years the the presence of a large number of ships and their space-warping engines did bad things to the fabric of space and time; which in turn affected the delicate interface between the brains of pod pilots and their machines. Hardened circuits and careful programming of the nano-routers limited the effects to perceived slow down of time, where the ship reacted much more sluggish than the pod pilot could think. Of course the phenomenon had a scientific name, but every pilot just called it 'Time Dilation'.

But annoying as time dilation was, it was a giant step forward from the state of technology just a couple of years ago, when capsuleers usually lost all contact with their ships in such a space-time crumple.

With that in mind, I gritted my teeth, gave my Purifier an encouraging pat on its imaginary head, and warped to the POCO at planet III, the center stage of the party, to take measure of the situation.

Of course, Nashh's partners in literal crime couldn't bear the thought of one their own going down without a fight, and had brought a squadron of carriers of their own to keep Nashh's carrier in good health. No way my meager torpedoes would be able to make a dent there.

There were a number of frigates and cruisers chasing about, but I had learned the hard way that my Purifier was no match for them.

An Absolution briefly cought my eye, but it was on the other end of the battlefield.

There - a cluster of Guardians. Spider-repping, of course, but maybe I could distract them a bit. And one of them was close enough to be just at the edge of my torpedo range.

Yeah - a very long shot. But I hadn't come all the way here to just sit and watch. Plus, I had never shot at a Guardian; at minimum, it was going to be educational.

Cloak disengaged, I punched the MWD to full power, directed my ship into a wide orbit around my target Guardian, and activated the my launchers. Every dozen of seconds, a volley of might Mjolnir torpedoes would burst out of the launch tubes, and even through the multitude of layers of tritanium alloy and inertial compensators I could feel the report.

The Guardian’s shield strength dropped rapidly, and I managed to keep my orbit without straying too close to any of the other combatants, when suddenly, but not unexpectedly, my damage projection completely vanished: the Guardian had hit Armor, and the repairs from its buddies took effect. I had a load of Nova torpedoes in my hold, but I knew they would be wasted.

Maybe it was time to lose some shots at at Nashh - if only to get registered on the official battle report. Usually I wasn't into that kind of thing, but after all this was a going-away party...

But the universe had other plans. A polite mental chime from my combat computer informed me that I had been warp-scrambled.

And a slightly less polite chime informed me that most of my shield had just been obliterated.

One quick command, and computer showed me my aggressor: one Ty Delany, fighting for the insurgents in this factional war, flying a Crow-class interceptor and lobbing light missiles at me. This was bad news - and I did the only thing sensible.

I didn't remember a Crow's top speed, but it would be close to my own, and while my torpedo launchers belched their nominally deadly payload at the Caldari ship, I knew that my only chance of survival lay in outrunning his point while my Ancillary Shield Booster was gobbling up charges to keep the ship's components in somewhat resembling of a close formation.

But it worked! Suddenly I was free of the Warp Disruptor's influence, free to go.

Except that I had failed to align my course to a warpable destination.

Cursing at myself while I did so, I swung the ship around into the direction of a safe point I had created earlier, knowing full well that this could give the Crow enough time to re-establish contact again.

It did. The race was on again.

Intently I watched the heat meter on the MWD approach the red line, while the ASB chewed up its last charges, and dipped into the ship's capacitor, and still the Crow was coming. What little armor my Purifier had possessed was long gone, the hull breach alarm screeched into my brain, the structural damage overwhelming the damage control system, the ASB reaching once more into the ship's capacitor, robbing it of so much energy that I couldn't even have engaged the warp drive anymore...

... and the Crow vanished off sensors.

Grid Separation! The very same assembly of warp drives which played havoc with us Capsuleer's perceptions, could also throw up very real walls in real space. You could be just a few kilometers from your target, yet not see him nor get a sensor return, nor shoot at him.

It was my life saver.

I disengaged the ASB, so that it could reload the spare set of charges in the cargo hold, and coaxed the capacitor energy management systems to spare enough energy to warp to my safe spot. A short reprise to let the engines cool down a bit, and onwards I headed towards the next stargate, to find a station for repairs in a neighboring system. 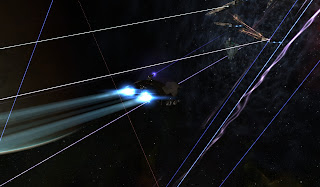 Leaning back from the terminal, I emerged from my reverie. Of course I had returned to the battle field after finishing repairs, only to be shot up by a bored S0TF gunner, returned yet again in a rookie ship, to etch my mark on Nashh's carrier, and returned one last time in my pod to catch a glimpse of Pandemic Legion's slowcats, which resulted in me getting podded. But all that already began to pale in comparison to the memory of the two, three minutes of me running away.