“Good! Adaptation, Improvisation. But your weakness is not your technique.”
-- Morphius training Neo, The Matrix


We were back in space. Naturally, as that’s where pilots were supposed to be. Station-life, even with its constant threat of permanent injury and death once you left the safe confines of the capsuleer-only levels, was nothing in comparison. There was nothing like it.


Except, maybe, driving a Walker, but I knew myself well enough to not give in to that temptation. And even Myra seemed to have forgotten about that part of her life, considering how she took to scouting like the natural she was. It had felt odd for me to rely on somebody else again to achieve an objective, but after the first few sorties we had started to gel and I found myself actually enjoying the team work. It definitely had helped Myra’s mood, seeing that I wasn’t replacing her in her role, but merely complementing it. And maybe it was her mercurial nature, but her initial cool stance had turned into an almost working relationship.


'Almost'… there was still some tension I couldn’t quite put my finger on, and for some reason it bugged me. Not that it would matter in a couple of weeks, when this operation would be over and we’d be going our separate ways again, but I couldn’t shake the feeling that I was missing something.


Our fleet comms came alive, and Myra’s voice pulled me out of my idle musings.


I focused. Timing was not quite everything in this endeavor, but a big part of it. Silently I counted down the seconds, while aligning to her position.


Thirty seconds - I killed my cloak.


I kicked my warp drive into gear, and kept an eye on the countdown of the distance. Other more organized pilots probably would have calculated this down to the milli-second, but me being me, I flew by the seat of my slip.


Our timing was good enough: I dropped out of warp right at her announcement, when the targets attention was focused on her, giving me time to lay a point on the primary, catching him unaware. Or at least that was the theory - in a few seconds we’d see how it would work in practice. My hull cameras activated first, showing me the Harbinger and the Drake flying in close formation, Myra’s tackler buzzing at high speed around the Drake, evading its missiles, while the field was littered with the wrecks of two or three Sansha squadrons.

My sensors punched through the last interference from the warp, the targeting computer spent interminable seconds on resolving the lock, and as one my offensive systems went active: missiles sped towards the battlecruiser, narrowly missing the ECM drones headed in the same direction. My disruptor shut down his warp drive, and the blackness of space between us lit up with red wavering streams of energy as my neutralizers shut down his active tank. He was taking damage, and he was taking it fast.


This wasn’t completely unexpected: while her ship was small enough to evade most damage from the Drake’s heavy missiles, the drones were eager to make up the difference. And they were good at it, which meant that Myra might have to bail sooner than expected. Watching the Harbinger’s telemetry, I willed my missiles to go faster, explode harder, but even with its tank disabled, the ship had a sizable amount of armor for me to chew threw. Too much armor. 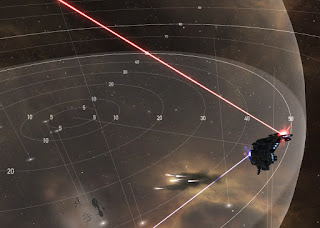 Myra’s engines lit up, and seconds later she was gone, and not a moment to soon: the last volleys had put her into deep structure. A warning flickered on my virtual display as the Drake finally realized that my Cyclone was the bigger threat on the field, and started lobbying its missiles at me.

But it was too late to save the Harbinger: one volley, and compartments vented into space. Another, and the reactor’s containment failed, obliterating the Harbinger in a bright blue explosion. But there was no time to celebrate the victory: the Drake was making headway into my shield, and I knew that I wouldn’t be able to survive a protracted battle against that flying brick. With a quick command, my Cyclone swung towards our safe spot, and seconds later my warp drive rumbled into action.


As the warp tunnel engulfed my ship, unbidden lines of text appeared on my virtual sight:


Layers of electronic pretension fell away, and my ship felt again like the Purifier it was, and not the battlecruiser the simulation had required it to be. And somewhere out there, two missioning ships continued to pursue their trade, blissfully unaware that they had just been the subject of a live-navigation exercise.


“The Drake was always a long shot, flying brick it is.”, I countered. “More important is that we got the Harbinger, and survived to tell the tale. Unlike a certain previous run-through, if I may remind you.”


She sighed theatrically, then asked [ Again? ]


Already her frigate was setting a course towards the next star gate.