Why the boss had called for the debrief in this bar instead of our corp office still puzzled me. It was so out of character for her - but then again, maybe with the job done, she had decided to loosen up a bit?


Either way, it worked for me - I needed a drink. The bar tender was the same as last time, and though he probably didn't remember me, he was still as efficient: I caught his eye, held up two fingers, and moments later two smoking shot glasses materialized on the counter. Picking them up with one hand, I made my way over the booth where I had seen Myra and Miss Phage already sitting.


"Sorry for being late," I apologized by way of greeting, doing my best to keep my voice neutral, "I had a little run-in with Eta."


I set the glasses onto the table and slid in next to her, across from our boss. She looked at me, and using my now free hand to lightly cup the back of Myra's head, I leaned over and gave her a lingering kiss. “Thanks, kitten," I murmured when we finally broke, "I needed that.". She smiled wryly, and her eyes sparkled. “Good to see you too!”


Turning my attention back to Miss Phage, who had been watching on with amused interest, I picked up one glass, and emptied it in one go, savoring the burn of the liquid as it ran down my throat, feeling it slowing down my thoughts just enough to get a better handle of them.


"You said it was 'related'," began Miss Phage as I slammed the empty glass upside down back onto the
table, unable to completely suppress the shudder caused by the drink's potency. "I presume that your sister is not fully happy with our little operation?"


"You presume correctly." I picked up the second glass, but restricted myself to just sipping this time. "War-deccing all those industrialists, just to drive them out of Jerma, had left her grumbly enough - but she hadn't said anything because we didn't actually shoot anybody..."


"...'cause they all left system to frolic somewhere else, or dropped corp, smart bears they are...", interjected Myra.


"...right, and also because it did reduce ice mining competition, at least for a little while. I even think this is an idea her Alliance might pick up as well, if they ever get their wartime SOP sorted out. No, what really pushed her off the handle was our little rampage the last days."


"For her it does - especially when it's her sister, i.e.: me, doing the shooting, and when the targets are in general defenseless industrialists, like her." I looked at the ceiling. "Things went downhill quickly then. In the end she stormed out, growling that she didn't want to be anywhere near me and my 'hi-sec griefing boytoys' for the foreseeable future.”


Myra chortled, then caught herself and put a hand on my arm. "Sorry.", she said. “But, I mean, if it were anybody else but your sister..." 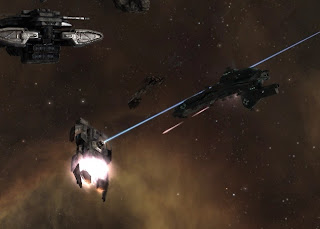 I sipped my drink, then shrugged. "It's ok - she is right, you know? All the stuff I did the last weeks, the last months ... when I started out as pilot, I had promised myself to be a good girl, stick to my ROE, and fight pirates and outlaws. But now..."


"'Battle not with monsters...'", recited Miss Phage dispassionately. "And now you're regretting it?"


It was a question I had pondered for a while then, so the answer came easy. "No, not really, only that I pissed off Eta - that is something I just have to fix, somehow. But otherwise..." - I looked at both of them - "... these months had been the most fun I have had ever since LSA fell apart." I drained my glass, and set it onto the table next to its sibling. "But you didn't call us here to hear me wax melancholically about my life's little problems - what are we here for?" I mustered Miss Phage. "My guess is: Debrief?"


"That had indeed been the purpose." She smiled suddenly, gestured towards a nearby waiter, then continued: "But your little emphatic monologue actually had hit most of the important points, if only indirectly.” She cleared her throat. “We didn't get any kills, and probably didn't really make any significant impact on their income - but I had wanted to see how much fear a little nobody corp like mine could sow with careful target selection. And the result exceeded my wildest speculations.”


"You can say that twice!", laughed Myra. "They could have steamrolled us any time, with their numerical advantage of hundred-plus to two - especially since somebody here didn't exactly keep Op-Sec” - she winked at me - “but noooo: they left system instead!”


"Yup.", I agreed, in a better mood now. "And if they had tried to fight us while the war was on, we wouldn't be tempted now to try and kick in their teeth after the fact." I glanced at Myra. "Right?"


She nodded happily. "Some still haven't returned. But we got invited to a local coalition’s intel comms, so locally we’re actually now one of the good guys!“ Myra almost spilled her drink laughing.


"As I said,", repeated Miss Phage calmly, "it had been surprisingly effective.“ She looked at me. ”Maybe that’s part of why your sister is angry at you - she recognized her Alliance’s behavior in what our targets did.“


”Wait a moment now,“ I protested, taken aback. ”Fight or not, I happen to know that she did make a killing in reactions while her wars were going on!“


”Yes, she did.“ countered Miss Phage. ”But what about the rest of her Alliance? Any other success story to recount? Maybe a story about how an Alpha gang of theirs took out at least some of the hostile station campers in Amarr? No?“ She gazed at me sternly. ”Whatever my failings as CEO, I am in the habit of taking an interest in my employees and their surroundings, you know.“


She took a sip from the drink she had been nursing for a while now, and then added as if absentmindedly: ”Especially if those employees end up forming a team much better than I had expected them to.“


”Say again?“, blurted Myra, and I laid a steadying hand on her thigh. Obviously our enigmatic leader still employed parts of her detached observing self - best to let her finish first.


”Isn’t it obvious?“ Miss Phage asked rhetorically, ”A Minmatar ground stomper joined with an Amarrian pilot - you do understand the implications.“ She took another deliberate sip. ”It was … interesting.“


”What are you? A secretly-Caldari sociologist, or maybe just simply a lightweight when faced with drink?“ The words left my mouth before conscious thought could stop them - maybe somebody should have steadied me.


”Interesting question. But also an unimportant one. More interesting, at least to me, is another question…“ she leaned forward, catching both of our eyes. ”What are you two going to do next?"


There was a moment of silence, then Myra spoke up first.


"Back to Mechanized Operations," she stated soberly, with a quick side glance to me. "I've been away for too long already."


"Factional Warfare, at least for a while.“ I answered. ”I am still a lousy solo pilot against real targets, and I have a hangar full of ships I need to practice with. After that...", I shrugged, "...we'll see." My turn to glance at Myra. "We both knew that this would be a short time job. And moving on is the Way of the Hired Gun."


Miss Phage nodded, with no trace of drunkenness whatsoever. "I thought as much." She paused briefly. “Well, it has been a pleasure. And should you ever hatch a nefarious plan in future which needs a quiet little nobody corp to execute it - feel free give me a comm.” She glanced meaningfully at us. “And that includes your associates.” She relaxed again. “But until then..."


She picked up one of the drinks the waiter had delivered in the meanwhile, and waited for us to do the same.


"A toast to you, Ladies," she exclaimed, "for the successful completion of Operation 'Princess'!"
- Posted 8:36 PM