“A new day is here, it should be a lot better. The old is behind, a fresh look at the front.
It's hard to say just what it will possess - a new friend, an old enemy, a chance to progress.“
-- Impulse Manslaughter

I remembered this bar - I had been here last year. It was still spectacular.

The drinks weren’t just served - they appeared in front of you, as if by magic.

And with good reason, as one of the major attractions was the panoramic window revealing the traffic outside the station.

After all, it wouldn’t just do if this view were spoiled by bar tenders or other personnel - if you wanted that, you stayed in the back of the bar.

Outside the window, ships were putting on light show. Traditionally, Amarrian battleships carried most of the show with their multicolored beam crystals - but this year, the newly developed ”Festival“ launchers and their equally newly developed fireworks charges certainly stole the show. I would be out there, joining the happy chaos, if I hadn’t run out of charges earlier.

Guess I’d have to make due with just watching while sipping exquisite beverages. The hard life of a capsuleer.

Speaking of beverages: my glass was exhibiting distinct signs of emptiness. I gestured towards the main bar for a refill, keeping my eye on the spectacle outside.

My gesture was staid by a hand lightly gripping my forearm.

”Fancy meeting you here...“ I said, not taking my eyes off the spectacle outside.

The hand was withdrawn, a shuffling of a chair, and I was no longer sitting by myself at the table.

Nothing was said for the next couple of seconds, until I finally turned to finish my sentence.

”...what with your announcement of what would happen the next time our paths would cross.“

I had said it in a light tone, but I watched the body language closely (not that I had any illusions about my abilities in that regard). It was fleeting, but I did pick up on embarrassment. Confusion. Maybe even sadness. But only for a moment - then the all too familiar hard shell snapped shut again, and I could see the beginning anger.

”I thought that maybe you might like some company,“ the words were increasingly hissed, ”but if this is how you want to play it...“

A chair was pushed back, and it was my turn to grip a forearm in restraint. 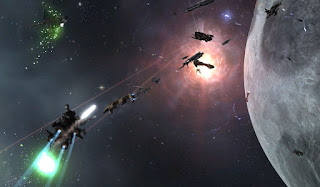 ”Hold on!“, I snapped, surprising myself. ”Considering how we parted ways, it shouldn’t surprise you that I don’t invite you with open arms now; especially not when I had no reason to expect you here! So I’d appreciate it if you could give me at least a chance to understand why you’re here, before you walk out on me.“ I cocked an eyebrow. ”Again.“

For a moment I feared that I had said too much.

Outside, a CONCORD police officer took offense to the use of real missiles instead of firework charges.

”You’re right. It’s just...“. A breath was drawn. ”I’m in the region on business, but since it’s New Year’s, I took the evening off. Somehow I found my way here, and when I saw you sitting here, I thought that... you know... maybe you would like some company. Put aside our differences for a while. Enjoy the things we do have in common.“ 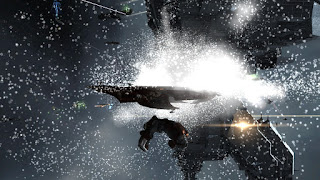 Interesting. But I needed to hear the ‘and afterwards...’ part explicitly confirmed.

”You mean, like ground stompers celebrating in no-man’s land, before returning to their respective front lines to shoot at each other?“

”Something like that, if it makes any sense. It’s probably a stupid...“