“A gold eagle, room and board. Six weeks gunning for some farmers.” -- The Magnificent Seven

It wasn't on the top of my "List of Things I Hate", but it did rate quite highly on it. It was one of the things when I could almost envy the null-sec grunts with their doctrine fits. Almost.

And it wasn't due to a lack of information; manufacturers were too happy to take out 10-page spreads in magazines with so illustrious names as "Ship and Pilot" and "Popular Nanomechanic". But putting a fit together and then digging through the market to buy all the components, was something completely different.

The thought alone made me shudder. And I had to do it for 120 ships of 30-something different types, more often than not ship types I had never fit for combat before. No wonder I had been procrastinating.

But eventually I had steered my good destroyer to the hovel known as Jita, gripped the terminal, and had started juggling modules on fit planners. I had just started to get into The Zone, when the terminal signalled an incoming call - audio/video.

It was Eta. Since she had promised to move my equipment if only I got it sorted already, I'd better be nice to her.

"Hello Sis!", I opened the call cheerfully, waving the latest issue of "Blasters & Charges" in the field of the video receptor. "As promised, I'm getting my fits sorted."

[ That's fine. ] She was visibly pre-occupied. [ This might interest you: we have intruders in our alliance wormhole. Intel is sparse, but it seems they have put up a small POS and caught some of our ships. ]

"Is that so?", I asked, intrigued, ship fittings forgotten. "What else can you tell me?"

[ Not much, I'm afraid. The person on scene is not very talkative. ] She sighed. [ However, I made contact with our ex-pat Lance in the WH, and he's flexing his CovOps muscles. I should have him on this channel in a bit, as well as Heloisa. ]

Her image cut out, and I noticed the slight echo indicative of a multi-person audio channel.

"Howdy everyone!", I greeted the new participants, already disrobing. "Most important question first: where is the exit?"

Brilliant! I would be able to help without getting shot at by some faction's Navy. Jogging towards my pod while giving orders to the docking bay crew via my subcranial transceiver, I continued to listen in as Lance explained the situation as he knew it.

It seemed that one of our Alliance elders had recently moved into the WH, and while bouncing around the system, she had stumbled into a POS which hadn't been there the day before.

Literally stumbled. Count minus one Loki.

Getting useful information out of said elder had proven tricky (apart from a request for Guardians and Falcons), but Lance had found the bookmarks locating the interloping POS and had now his own camera drones in it.

The invaders were three: a Maelstrom, a Bestower, and a Falcon; with a Buzzard floating unmanned in the POS bubble. The POS itself was a small one, but armed with a dozen EWar modules, and bristling with small and medium autocannons and artillery.

Crucially, the medium batteries were not online, and the Bestower was apparently doing supply runs still. They weren't fully entrenched yet. There was still time!

More intel came in: the hostiles were a little seven person corp, active mostly in w-space. Just a couple weeks ago they lost a POS in another w-space system. ...hmmm...

Looks like this wasn’t a corporation to execute evictions, but more one to get a beachhead in WHs to execute raids on their locals. Well, we’d see about that! I hadn’t shot a POS in a while, but putting together a sniping Apocalypse in Amarr Prime shouldn’t be too difficult. Beyond that, it’d be a fight of attrition.

Undocked, I commanded my destroyer towards the next stargate.

Ten hours later, I called it a day. I was the last one on the field, and there were only a handful of E-War batteries left to incap - and it wouldn’t really matter until the POS came out of reinforce, like 30 hours from then. And while it was fun to play around with NEUTONIS, there was no way I could defeat him - not with him having the POS’ force field nearby for quick relief, and me having only large lasers fitted. 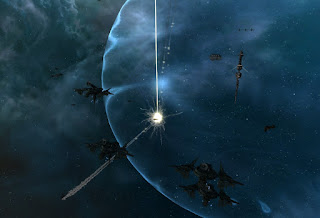 It had been a rather typical POS attack: while the owners had showed up (and even managed catch me in a weak position, but were luckily unable to follow through), in the end they were no match for the WH incumbent’s fire power. Especially not when the hostiles managed to collapse the WH exit to hi-sec onto themselves, and got caught in a bubble.

But the heroes of the day were the Frigate Mob!

Apparently, just a few days before, a new corporation had joined Redrum Fleet - full of rookies, and brimming with zeal. While predominantly miners and industrialists, they still had that exuberant “let’s mine in low-sec!” fearlessness in their hearts. So when they heard that the Alliance’s WH was under attack, they up-shipped into frigates and destroyers to the best of their abilities, and offered their help. They didn’t get any official kills, and suffered a number of losses to the POS guns, but without them distracting the POS’ E-War batteries, the job of us heavy-hitters would have been immensely more difficult.

Which only goes to show: Every Ship Counts!
- Posted 4:20 AM