"If it's not hazardous, it's not worth blowing up." -- Khori Renalard

“…offices are now under control of Redrum Fleet. A spokesman for…”

“… first test flight of the Astero and Stratios. Will the two new ships hold up against…”


Frustrated I turned off the view screen and threw the remote onto a chair. For once, high security Empire space was where the action was, and I could no longer go there. I didn’t regret my decisions leading up to this, but it was a reminder that everything had its costs.


I stood up and walked over to my quarter’s bar to fix myself a drink, when I noticed a discreet indicator blinking on my comm terminal. Who would send me a message today of all days? Beverage in hand, I pulled up a chair and called up the message.


Curious - it was a pre-recorded holo-mail from Miss Phage, notionally my boss. I instructed the terminal to replay it, leaned back and sipped from my drink.


I studied her expression. On previous encounters, I had experienced her as collected observer, always in control of the situation. This Miss Phage was slightly different, a weariness in her demeanor.


“Since you two stubbornly refuse to join corps more worthy than mine,” continued Miss Phage, “I might as well keep you informed about our latest happenings.”


An amused smile curved her lips, unusual for her.


“You surely have noticed the land grab over the customs offices going on. I got interested myself and did a little fly-around in this neighbourhood, seeing what the locals were up to. Which is how I came across these two fine pilots.”


She gestured to her side, and the camera zoomed out to reveal two pilots sitting next to her. I sighed. While I didn’t recognize the male, I recognized the woman far too well: we had had our run-ins, and apparently even two regions away I still couldn’t escape her. The only thing unusual was that her smile for once wasn’t mocking, but almost - wistful.


With the wider angle, more of the room had come into view as well, revealing them not so much seated, but slumped into their chairs, drinks in weary hands. Comprehension dawned - these three pilots had just spend a triple shift in their ships and were exhausted, which also explained Miss Phage’s less-than-calm behavior. I leaned forward, having an inkling of what had transpired.


“They both were plinking away at an InterBus custom’s office, with not much hope for completion.”


“I was just curious if it was possible,” interjected the male Gallente, with the woman nodding agreement. “And maybe put enough damage on it that I’d be listed on the combat record once a real attacker came around.”


“Well, I made them a deal.”, said Miss Phage. “I’d provide them with standings, ammunition and slightly better weaponry…”


“And dinner with drinks!”, added the woman.


“…and that,” acknowledged Miss Phage, “if in return they only kept shooting.”


“Long story short: eight hours and one quick Amarr run later, HZRDS became a landlord.” She smirked. “Not bad for a failed corporation.” 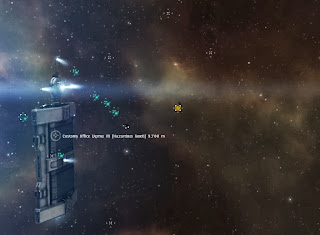 “I don’t know how long we can hold on to this CO,” she admitted, “and my hope is that if the local powers decide they want it, that they are smart enough to simply buy it from us, instead of wasting time and resources to grind it down - but there is no telling.


”But until then, we’ll collect the PI taxes, maybe enough to even have a corp picnic or something. And should we find ourselves under a war-dec - now you know why.“


”Though I imagine that neither of you two would be heart-broken about the opportunity of legally shooting people in hi-sec Empire space.“