The pain cut through my brain white and hot, tearing up my neurons like an army of nanite buzz-saws. Slumping forward until my head came to rest against the plast shell, I opened my mouth, but no scream would emerge. Oxygenated amniotic fluid surrounded me and filled my lungs, rendering my vocal cords useless. I boxed the shell, desperate for any sensation which would distract me from the spike in my mind.


And suddenly the shell vanished and I fell forward onto a cold floor, the impact lighting new fires behind my eyes. Trained reflexes took control of my body, and I convulsed to expel the fluid from my lungs, no matter what it did to my head.


But it had become harder and harder every time. Mr. Burning Neuroscanner and myself had never been friends, but ever since I had moved out to this backwater outpost in Catch, our relationship had drastically worsened. The docs said that it was psychosomatic - which didn’t change the fact that the pain was very real.


A prick in my arm - a hypo injecting a bipartite drug cocktail into my blood stream. I clenched my teeth and willed myself through the seconds the topical painkiller needed to become effective. But finally the pain started to subside, and I allowed myself to relax, still lying on the floor.


Warm hands glided over my body, took hold, helped me up. I felt a robe draped around my shoulders.


“How often more?”, asked a voice, touched by pity.


I turned my head towards the voice of the med-tech, still not being able to see anything but shapeless blobs.


The med-tech grunted noncommittally, knowing better than to ask why I was putting myself through this. Heck, I could hardly remember myself.


Back in Empire, the plan had sounded so … well, sound. Jump-clone out to this station, where I still had ships stored, left over from yet another of my former Alliance’s unsuccessful null-sec endeavors. Sell the small stuff, evac the more valuable ships one by one. All of it deeply symbolic even - cutting what hopefully would be the last ties to my former Alliance and what had happened the previous year. All that would be left afterwards would be manning the turrets for my sister whenever she needed help - strictly a family affair.


A good plan - except that I had forgotten that I no longer had docking rights at this outpost. So once I took a ship out, there was only one way for me to re-enter the outpost to get the next one.


A bitter chuckle bubbled up through my throat. The painkiller was working, now I only needed a drug to get me to symbolically cut ties in more traditional ways - like getting a tattoo, or cutting off my hair. Life could be peachy.


Resignedly, I laid a hand onto the med-tech’s shoulder, and let him lead me into Recovery.


“You are fit to be released, but you are not fit for space duty.”, the chief resident said sternly. “You need at least a day’s rest, and for God’s sake - eat something!” He leaned back and briefly rubbed his face. “Not that I have any illusion that you’re going to do any of that.”


He nodded. “Out with you then!”, he ordered gruffly. “Before I forget my oath and tranq you personally.”


I smiled at him and stood up, light headed, bemusedly noticing that my knuckles were scraped. The painkiller had done its job, the cloning pain a mere memory throbbing in the background of my mind; now the euphorant was taking over. 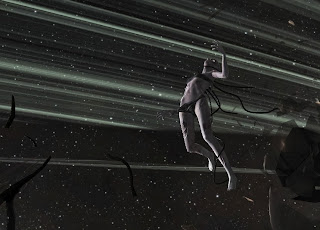 The Doc wasn’t wrong, I had to admit when I almost stumbled in the doorway: I really should get some rest and real food. But if I did that, I’d just start screaming at the walls again, or worse, hit the bars on the station. And I knew far too well how that’d end.


No. While there’d be hell to pay once I got back to Empire, for now it was the better choice to just push through.