The Lights Overhead: A short story dedicated to Druur Monakh)

Euthie looked up from her college assignment, and followed her younger brother’s frowning gaze into the night sky. There was an Upwell station up there, about eleven thousand kilometers above Adeel VI in a skewed polar orbit. At night, the lights, its sheer size and the high albedo of its hull made it shine brighter than any other planet or star in the sky.

A kind of surprised grunt spoke itself, deep in her chest. “…Huh. Wow.”

…Right now, there was a halo around it.

“Are those cynosural fields?” Imile asked. “There must be a dozen of them! Two dozen!!”

“I think so, yeah,” Euthie said. She set her tablet aside and looked up, thinking about what it meant.

“Damn capsuleers,” Imile spat. “If they’re fighting… I mean, what happens down here if that thing blows up? It’ll come raining down all over the planet!”

Imile finally tore his gaze away from the cloud of exotic energies pulsing far overhead to give her a disbelieving look. “Mourning?” he asked. “Capsuleers don’t die! They’re IMMORTAL. That’s the whole point!”

“No, they’re just cloned.” Euthie stood up and dusted some dirt and grass off her jeans. “And it doesn’t always go right…” She picked up her tablet again and hit the Galnet boards. Capsuleers naturally had an enormous following: The pod-watching community was huge and well informed, and when a capsuleer passed away it was always big news. It didn’t take her long to find the details—It was a trending topic across plenty of social media.

“…Her name was Druur Monakh,” she read. “She was a decorated pilot for Societas Imperialis Sceptri Coronaeque. And well-liked, too.”

The capsuleer’s public portrait was calculated to look… severe, maybe. She had a stern face, made harder by implants under the skin and a no-nonsense haircut. She certainly looked the part of a capsuleer: Nobody else could radiate so much power and make it seem so effortless. Her level, direct eyes let nothing slip about whatever demons might have lurked behind them, or what troubles she might have been hiding.

And yet, high above Euthie’s quiet suburban home and this pleasant summer evening, was the proof that she was not. In the end, she had been just as human as everybody else. Neither a goddess nor an immortal… just another human being, with friends who had come out in force to say their farewells and grieve.

She’d been loved, at least. Whatever else she had been, Druur Monakh had been loved.

With that thought in mind, Euthie put her arm around her brother and held him close, and together they watched until, one by one, the lights overhead went out. 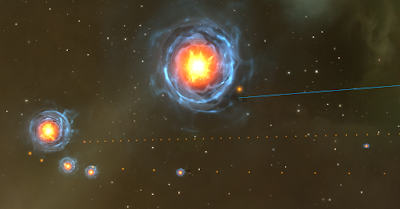 Many thanks to Stitcher for allowing us to post his story here. o7, Druur. Fly reckless.
- Posted 1:53 PM